History of the site

A Tale of Coins, Conquerors and Cannons 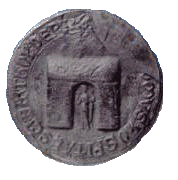 There has been a hospital on our site from the 12th century.  After the Norman invasion of England in 1066, many monks were brought to England from Normandy to re-organise the Anglo-Norman church.  One of their main influences was in re-building churches and cathedrals in the Norman style – Rye, for example.  The leper hospital of St Bartholomew was part of this programme, and was important enough to be virtually self-governing between 1189 and 1219.  The order of St Bartholomew came to England in the 11th century and no fewer than 165 ancient churches and hospitals were dedicated to him.  In 1290 King Edward I granted a charter for a fair and this fair, in 1305, was held on 24th August – St Bartholomew’s Day and occurred annually until 1848.

Between 1247 and 1415, possession of the hospital land see-sawed back and forth between England and France – every time an English king went to war with France, the land was ‘reclaimed’ by the English monarch.  In times of peace, the King of England was of course happy to ‘return’ the lands to the French, naturally for a very large sum of money!!

After Henry V’s famous victory at Agincourt, French tenure over the hospital lands was severed forever, and by 1435 the hospital buildings were in ruins.  The land had been given to the Priory of Syon and subsequently to Westminster Abbey until the Reformation, when it was sold into private hands.  King Charles II, having regained the throne of England, quartered his troops on the Barrack Field in June 1666, and between 1779 and 1818, the land was commandeered by the Government.  During this period, it was regularly used as a base for troops.  Rye was still an important cross channel port, and many regiments were barracked there, in tented encampments on the site of St Bartholomew’s Hospital.  A permanent Barracks Hospital was built on the site and was still being used as a cottage in 1835.  In 1844 a Work House was built, housing 436 poor unfortunates, and this building eventually became a home for disabled people known as Hill House Hospital, which was operational as late as the 1980s. 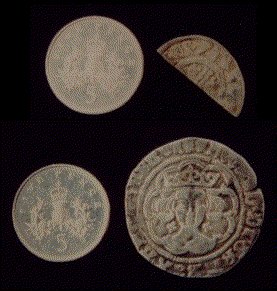 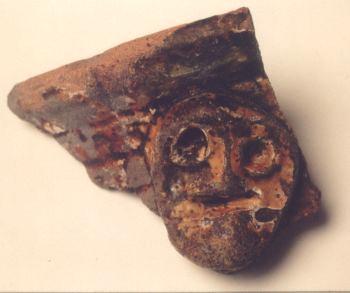 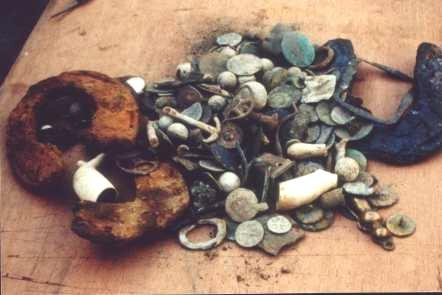 When demolition of the old Memorial Hospital began in 1994, the members of Rye Local History Group were invited to see if there was anything of historical interest on the site.  Given only a few weeks, in atrocious weather conditions, a veritable hoard of artefacts was excavated including coins and pottery from the 13th and 14th centuries, and much military memorabilia, including officer’s wig curlers, spurs and children’s toy cannons!

It was discovered that kilns for firing pottery had been on the site since medieval times, and pottery dating back 800 years was discovered.  Among the many fragments found was one, showing a decorative face, applied to a late 13th/early 14th century pot.  The actual kilns were found in 2018 when the old Ambulance Station was demolished to build The Hub on Rye Hill.

Without Mr Eric Wetherill of the Rye Local History Group these artefacts would have been lost forever, as would the old Hospital Bell which is still rung at 11am on the 11th day of the 11th month every year … but that’s another story!  I am grateful to Rye Castle Museum for permission to reproduce the sketch of the encampment of the 13th Foot.  There is a permanent exhibition of some of the Group’s finds in the entrance to Rye Hospital.

By Jo Kirkham, Board Member 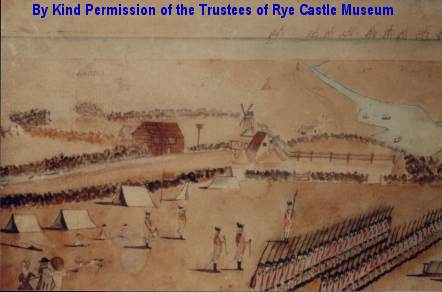